Farewell to the Year of the Snake.  I found it to be appropriately named, as I saw more than twice my usual number of wild snakes this year:  two different immature black rat snakes, a rough green snake, an unidentified, pale-bellied snake I saw at a distance, and an unidentified snake that might be some kind of hog-nosed snake.  I also found more dead snakes than I normally do, putting the total number at around eight or nine — still more than double usual. 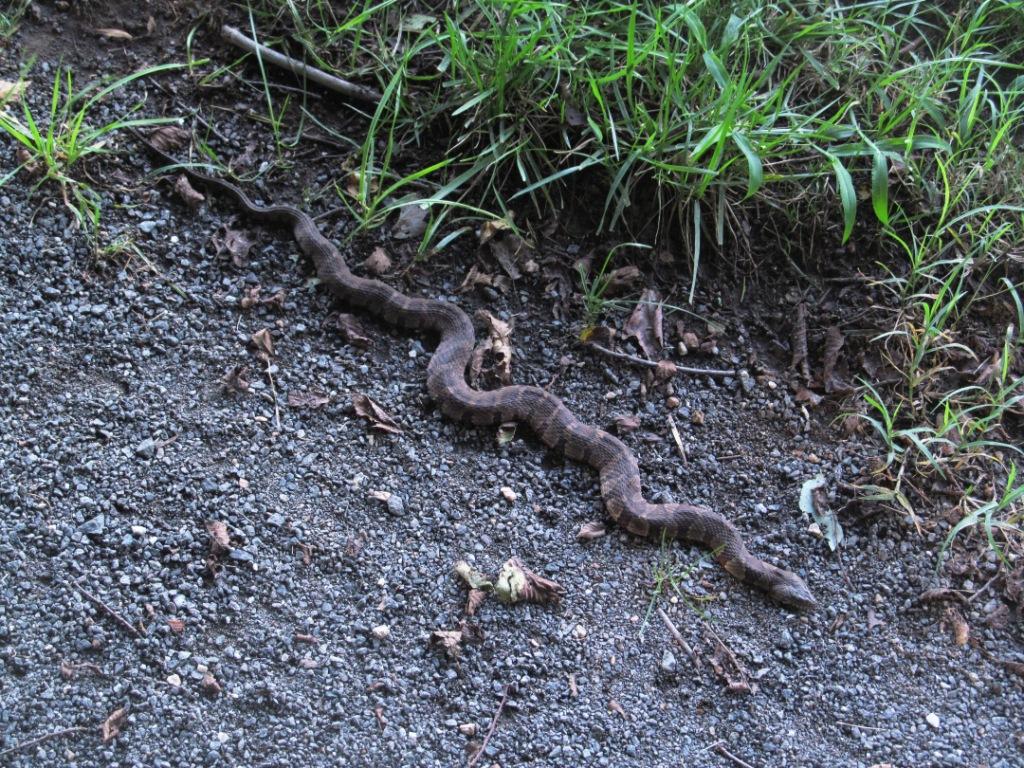 Do you know what kind of snake this is?  I haven’t been able to identify it yet, but it has round pupils, and the thick neck and head make me think of a hognose.  Only, the nose itself isn’t quite right for that…

[UPDATE] I now believe it to be a Brown Water Snake, Nerodia taxispilota, but I would still appreciate any comments from experts.  Supporting its identification, it was found under overhanging limbs on a gravel path between a pond and an occasionally swampy area.. 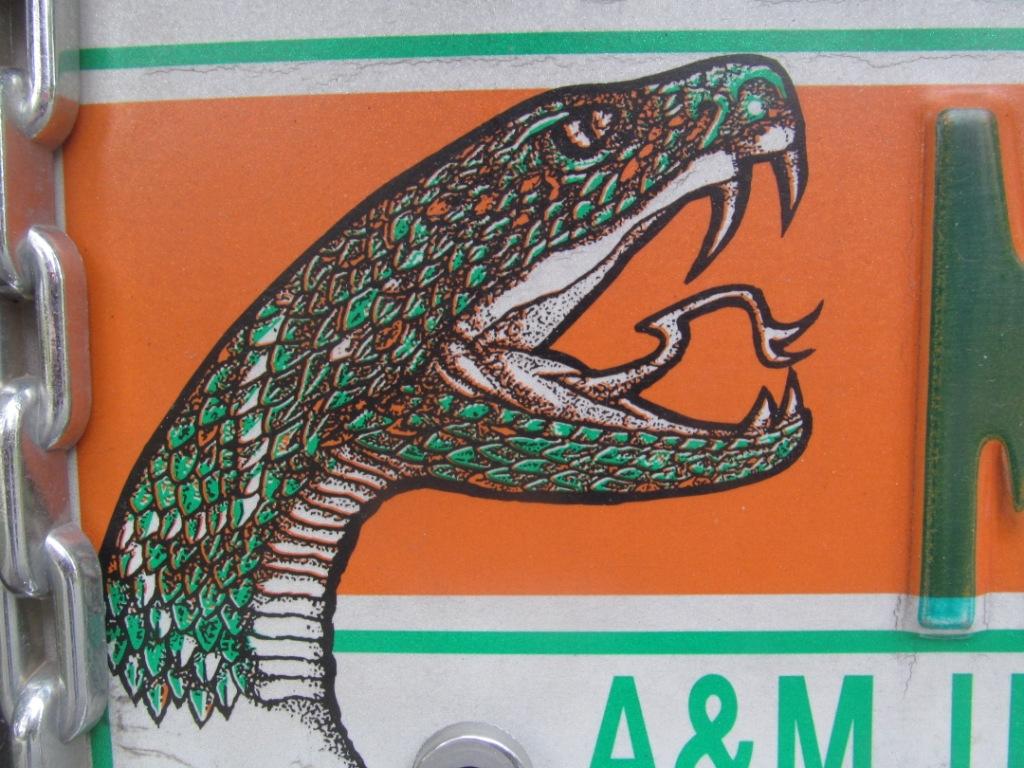 Even license plates seemed to play into the zodiac this year.  One of my neighbors had a visitor from Florida A&M University.

I wonder if I’ll notice anything interesting particular to the Year of the Horse?

Though it may be the Spring Festival, I consider this to be the middle of winter.  Still, there are many flowers blooming and budding in my area. 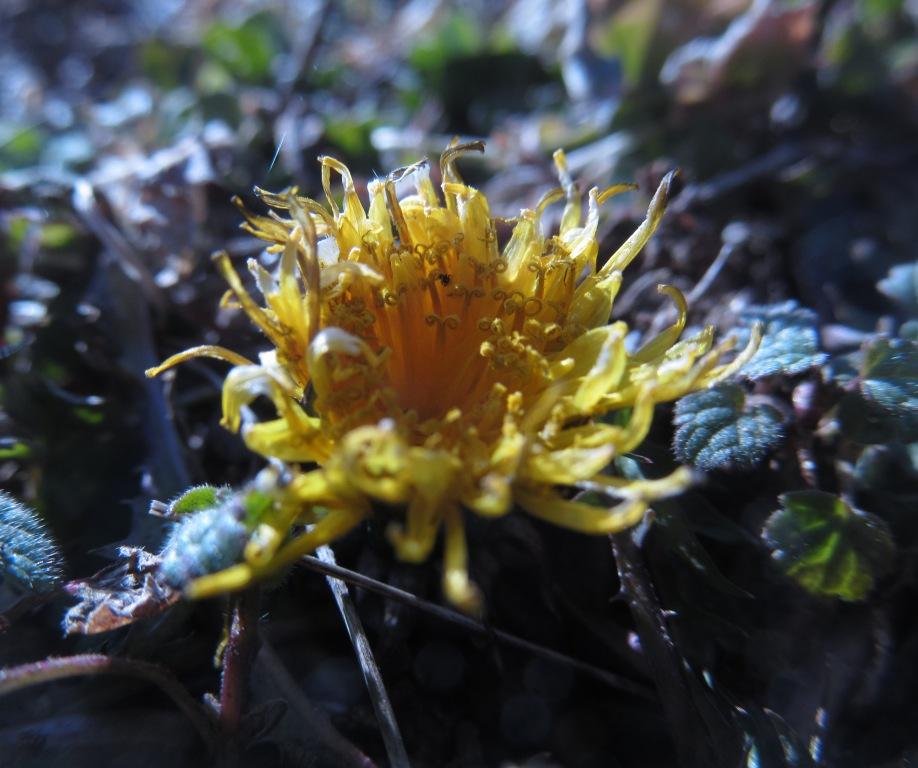 Many people love eating dandelion greens and other parts.  I’ve tried them, but wasn’t impressed enough to make them a consistent part of my diet.  The greens were a little bitter, but tolerably so; I just didn’t think they were wonderful, like young dock leaves, wild lettuce, or catbrier shoots are.

A store-bought dandelion root tea has been the only part of a dandelion I simply couldn’t stand.  It smelled and tasted exactly like tobacco smoke!  I think sometime I should try making my own, since there might have been something wrong with that batch.

What I wonder about is how people can make dandelion wine from the flowers.  They look and smell amazing, but the taste is that of a green vegetable.  Still, considering my great-grandfather passed down a recipe for dandelion wine, I’m a little interested!  It does contain a lot of sugar… and sugar helps the flavor of lots of things.  Though the flavor might also be influenced in no small part by the spices and citrus fruits…

My great-grandfather’s hand- and typewritten dandelion wine recipe.  The version below was puzzled out from this.

For a five-gallon keg:

One and a half yeast cakes

On the day that you pick the blossoms, boil the water and pour it over the blossoms.  Cover; let the blossoms steep in the water for three days, then strain.  Mix the crushed ginger with the sugar and add, along with the citrus zest and pulp, to the strained dandelion water.  Boil concoction gently for 3/4 hour.  Strain and put into a five-gallon keg.  When cool, add yeast.  Spread on well-toasted, small piece of bread; allow to ferment for three days, then water seal it.  Bottle in three months.

I admit, I have no idea what that next to last sentence actually means, especially what is meant by ‘water sealing’ — this is an old recipe, and I’ve never made it or anything like it before.  If I had to guess, I’d think it means that you’re supposed to spread the yeast cake on some toast and allow it to ferment before adding it to the keg, and that the ‘water sealing’ would refer to sealing the keg such that the liquid doesn’t contact air, but I wish my great-grandfather was still around to ask.  Anyone who knows what he meant, please let me know!

I know there are easier dandelion wine recipes out there, but someday I might like to try the family recipe — though maybe a bit scaled-down.  Here is another, similar recipe that could be a more manageable place to start:

I’m also intrigued by what Samuel Thayer, a forager I admire, calls the dandelion crown — his favorite part of the plant.  It’s the center of the dandelion plant, consisting of the unopened buds and the whitish part underneath.  He discusses preparing them, and digging them up with a special tool made from a spoon, in his excellent book, Nature’s Garden.

I hear that dandelions go completely dormant in even slightly colder climates.  Around here, they certainly don’t thrive in the winter like they do in spring and summer, but I’ve still usually been able to find some dandelions flowering in every month.  Because of this, it might not be so easy for me to find a dandelion crown to eat… I’ll have to pay attention and report on that later.

Speedwell, on the other hand, only started blooming in the middle of January:

Veronica persica, one of my favorite weeds, despite my not knowing of any edible or medicinal use for it

As a child, I called these flowers bluets, though real bluets are actually unrelated.  Speedwells are in the plantain family — the medicinal herb, not the banana — while bluets are actually in the coffee family.  The azure bluet is another common weed around here whose flowering time starts later, but overlaps with that of speedwell.  It is also bluish, and about the same size, but the bluet’s petals are narrower, with a more noticeable purplish cast to their color. 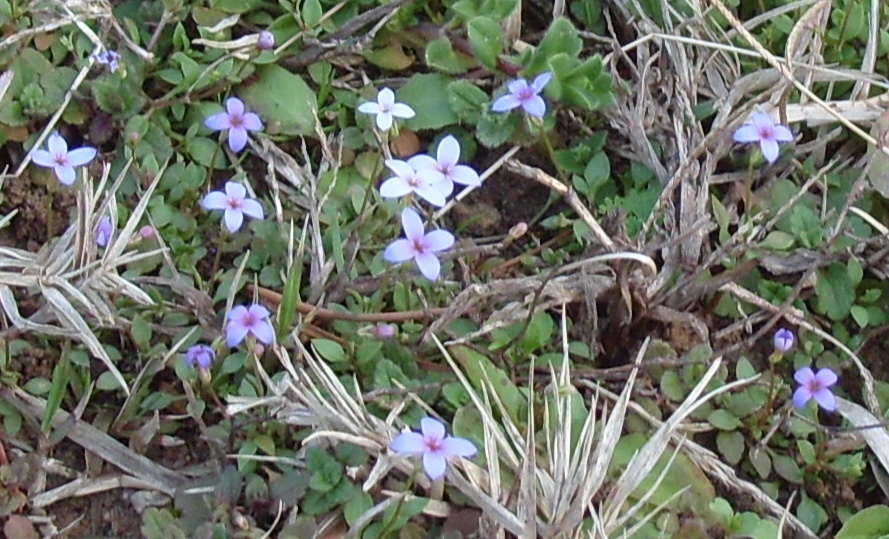 Houstonia caerulea, the azure bluet, can range from medium blue-violet through pale, bluish purple to white, and sometimes has a yellowish center.  They’ll start showing up in the spring.

Speedwell has a zygomorphic flower, like an orchid, with only bilateral symmetry.  Note how the petals are not all the same size or shape, unlike the actinomorphic (radially symmetrical) bluet flowers.

I love to see speedwell when it blooms in midwinter and early spring.  I love blue flowers, and Persian speedwell, also called winter speedwell, is one of the bluest growing wild in my area, like little bits of sky.  The unfortunate thing about it is it’s basically impossible to bring indoors as a cut flower.  The bloom will simply fall off of the stem at the slightest disturbance.

Another winter-blooming favorite of mine is winter honeysuckle. 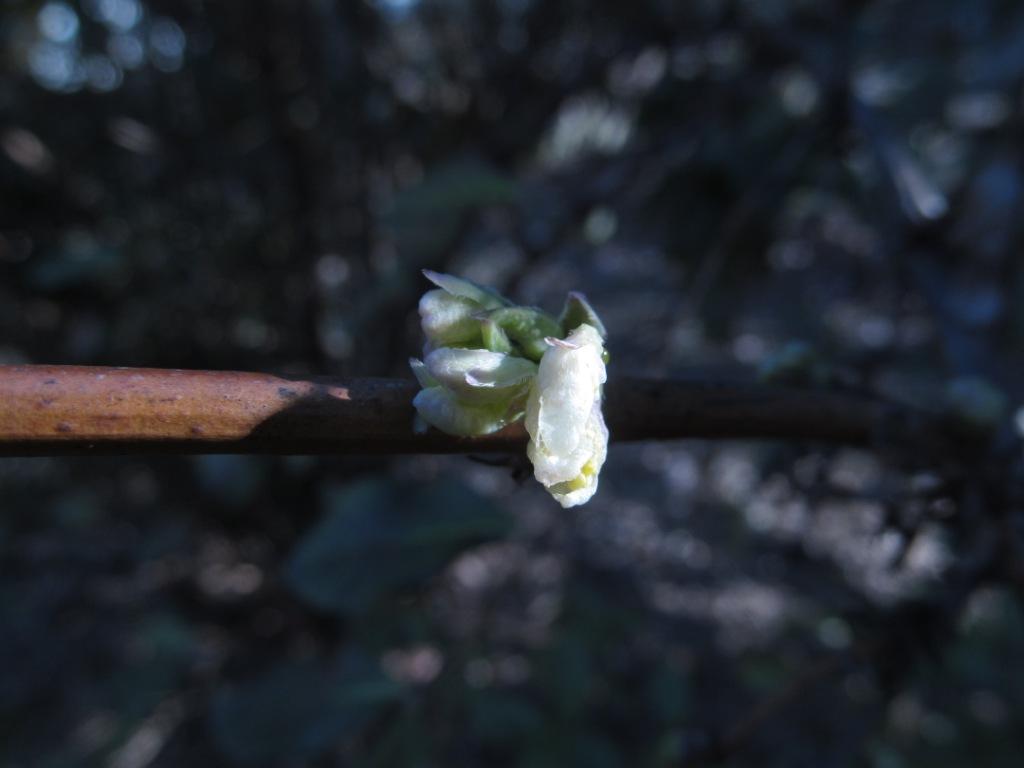 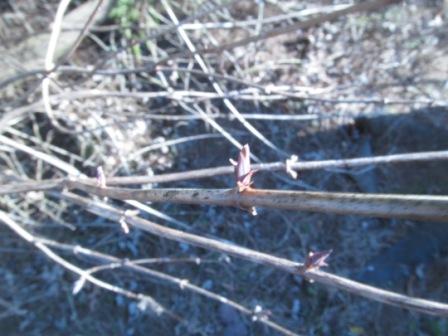 Trumpet honeysuckle being ironic — sempervirens means evergreen!  New growth on these recently bare branches is coming in pinkish-bronze.  In my area, it’s the Japanese honeysuckle that hasn’t lost its leaves all year.

But some honeysuckles are not vines, but shrubs.  Lonicera caerulea is one that I’ve always wanted to see.  The long, blue berries, marketed as honeyberries and popular in Japan and Russia, are supposed to be delicious, and the flowers fragrant.

Lonicera fragrantissima is another fragrant, shrubby honeysuckle.  The flowers have an amazing smell, floral and lemony, with a bit of a Froot-Loops odor as well.  They’re very pungent; I can smell them long before I can see them. 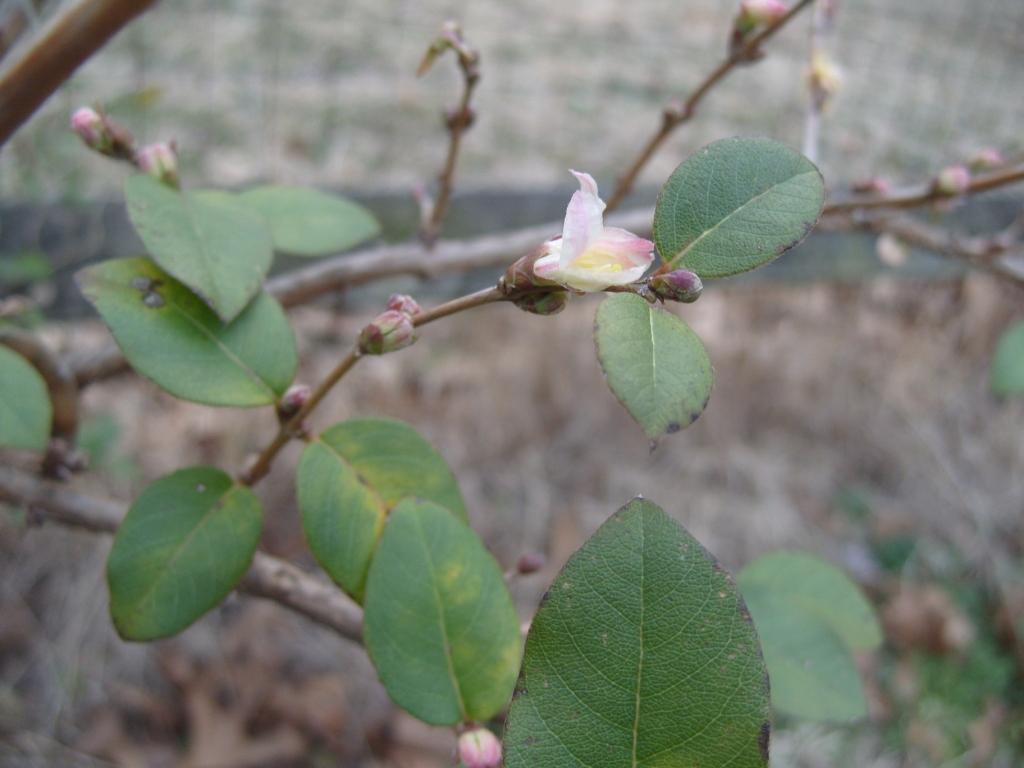 These pink-and-cream flowers, which begin and end blooming at about the same times as speedwell, are followed by small, translucent red berries.  Like many other honeysuckle species, the berries are not edible. 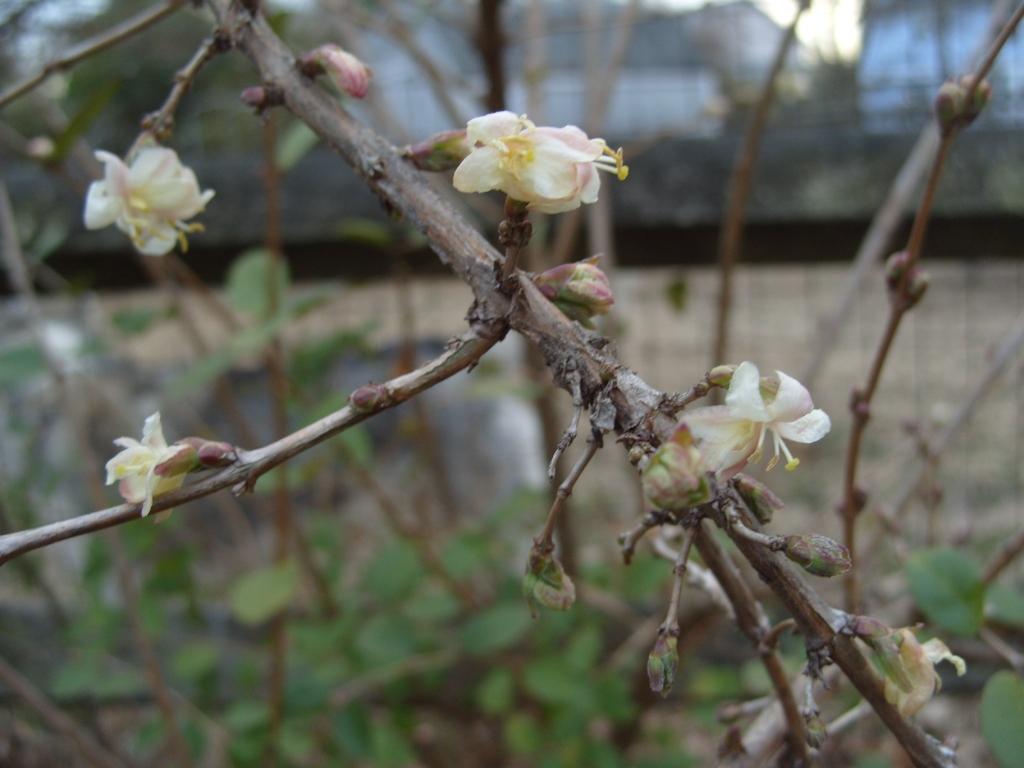 Trees that are probably blooming now, but not where I can walk to, include witch hazels and some ornamental Prunus species — cherries, apricots, and plums.  I’m not very good at consistently telling Prunus species apart yet!

A blooming Prunus sp. I photographed in the UNC arboretum in January 2010 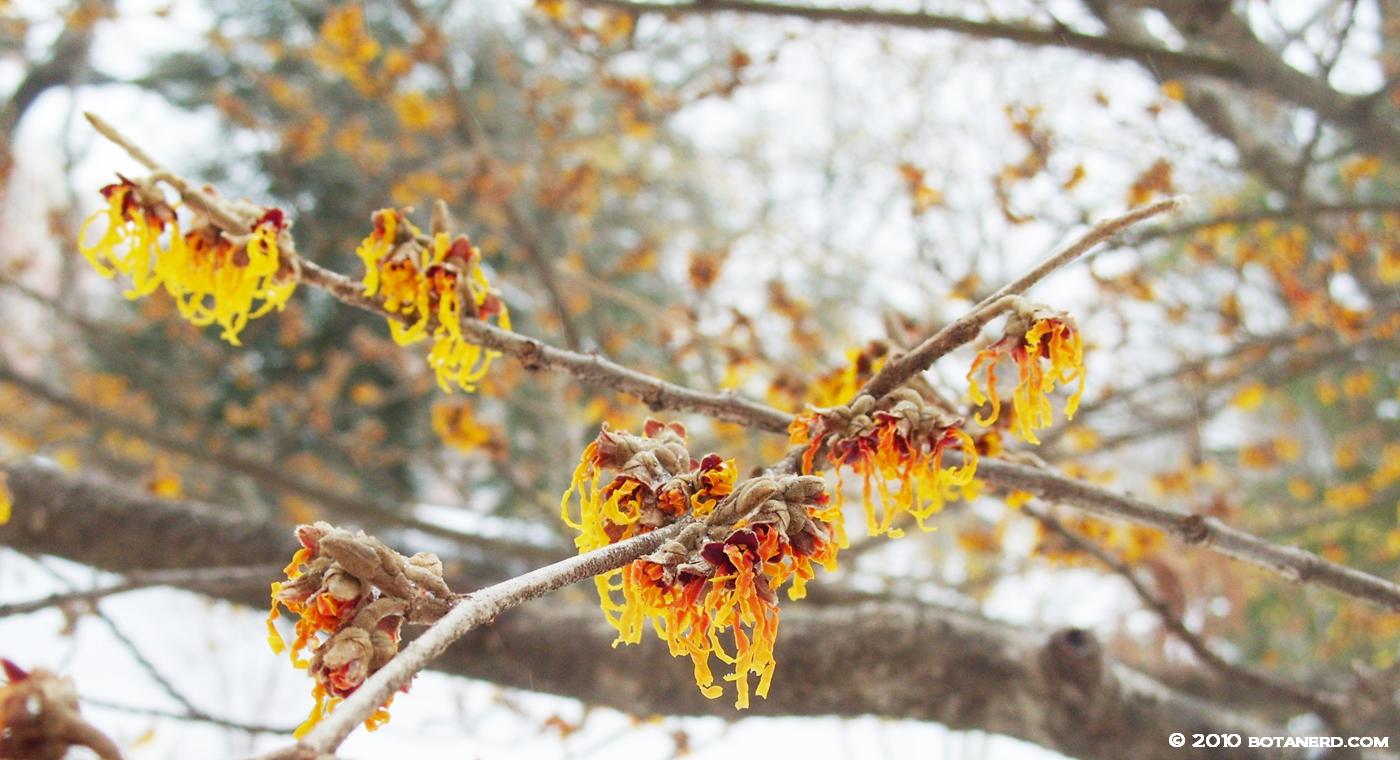 I love witch hazel.  Hamamelis virginiana is native, and the cheery yellow flowers often have a wonderful fragrance.  Some hybrid varietals have orange or red flowers, which are even more striking against the snow.

Other early-flowering trees are in bud, soon to bloom. 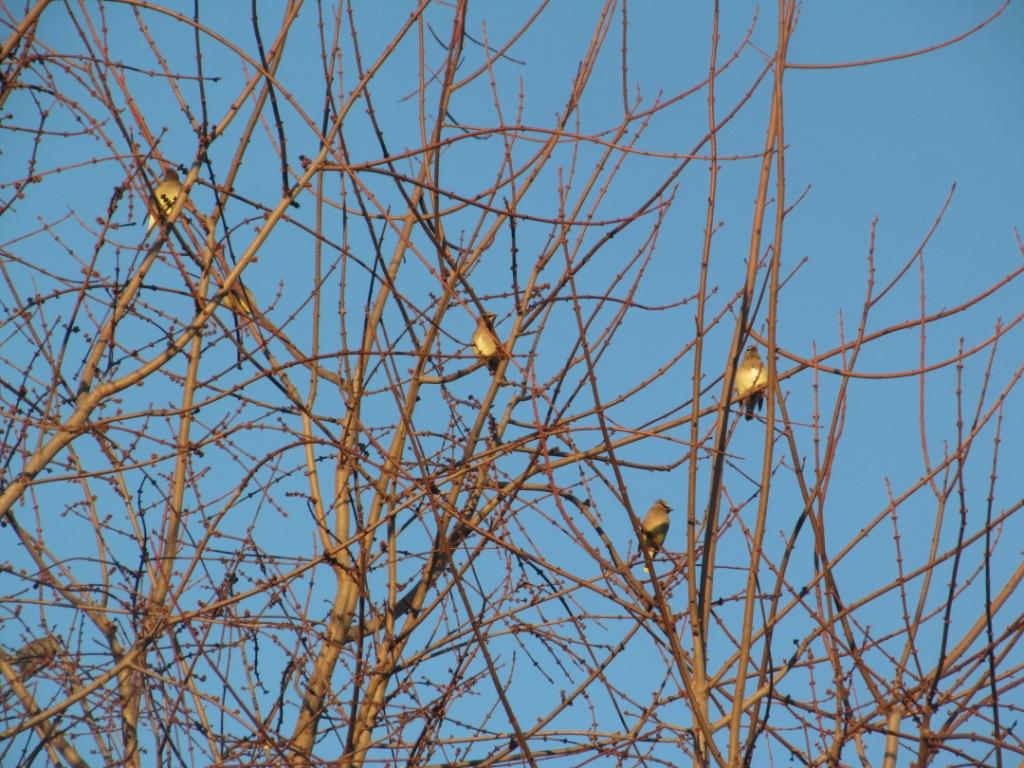 Silver maple, Acer saccharinum, buds are visible on the perches of these Cedar Waxwings. 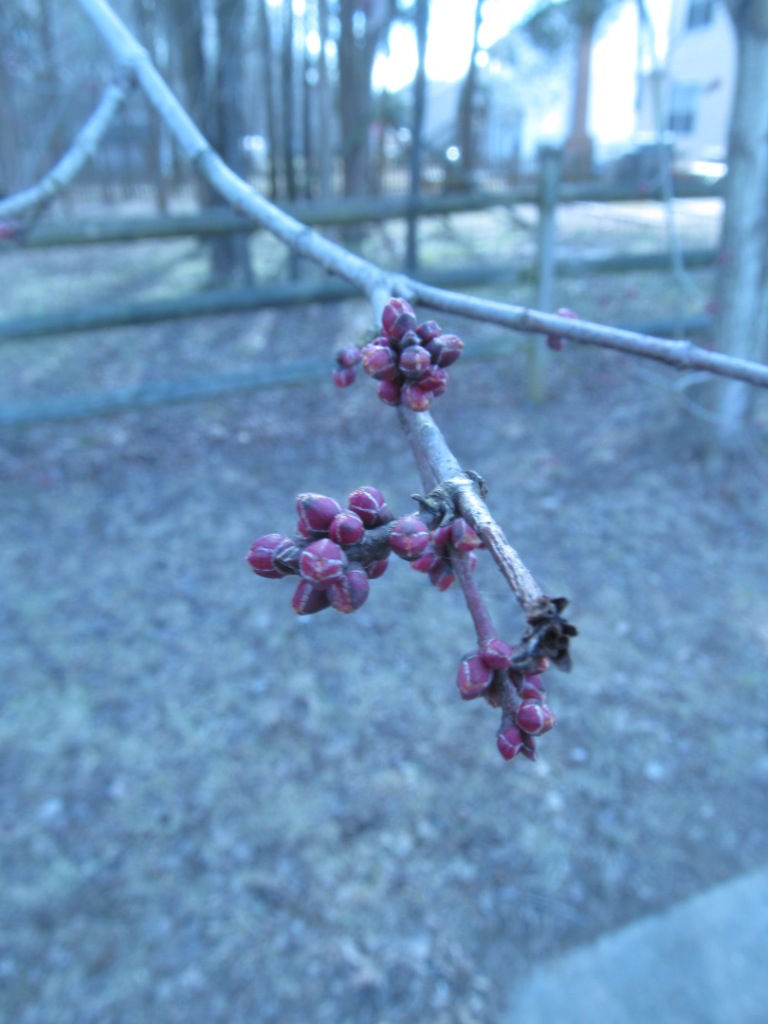 I always look forward to maple flowers, especially those of the red maple.  Different species and even individual trees flower at different times, but generally all before their leaves appear, in the late winter through the springtime.  Red maple tends to be one of the earliest to flower, and I always look forward to the beautiful explosions of red.  They have a delicate scent that reminds me of apple blossoms.

It’s interesting to me that all the plants in this post that are actually blooming right now, not just in bud, are non-native.  The exception is witch hazel, which is supposed to be native to my area, though I’ve never actually seen it growing wild around here.  I’m sure this has a significant ecological effect.

In honor of the holiday, though, I’ll give a taste of things to come with a photo of what the red maple flowers will look like in full bloom.  Definitely festive!  They remind me of strings of Chinese fireworks.