Also, happy seventh day of Christmas!  My family has always celebrated all twelve, beginning on Christmas Day.  This year, I spent about a month painting an Advent calendar which honors that.

It features our local mistletoe, Phoradendron leucarpum, at the top:

A cluster of stylized Eastern mistletoe

Though other Phoradendron species do grow in conifers, P. leucarpum prefers hardwoods, making this painting a little inaccurate!  One of its common names is Oak Mistletoe, but it grows in many other kinds of hardwoods as well, including maples.

Phoradendron mistletoes may resemble, but are a different genus from the traditional European one, which is in genus Viscum.  Both used to be classed in their own family, the Viscaceae, but genetic evidence suggests that they both belong in the Santalaceae family, along with the sandalwoods, genus Santalum.  Interestingly, sandalwoods, like mistletoes, are also hemiparasitic!  Instead of parasitizing tree limbs like mistletoes do, sandalwoods parasitize the roots of neighboring trees.  One species, the desert quandong of Australia, can stretch its roots over thirty feet to reach host plants!

Like the European mistletoe, Phoradendron leucarpum is dioecious, with separate male and female plants.  Though we have plenty of mistletoe around here, I have never seen any berries.  I’m not sure how likely it is that they’re all male, though; I’ll just have to look harder! 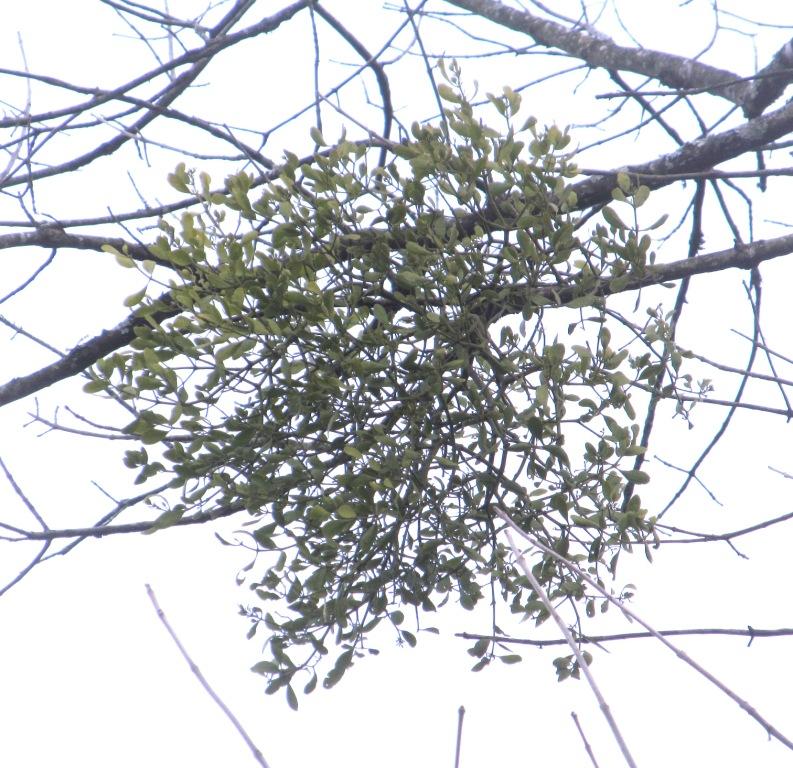 Mistletoe plant in my neighborhood

It looks graceful and delicate way up there, but those leaves and stems are surprisingly large.  I was amazed when the wind blew some down this year and I was able to pick it up.  The leaves were at least two inches long, and as thick as those of some succulent plants.  Maybe that’s an adaptation to staying evergreen high up in the wind, unprotected by the host plant’s leaves, and having to steal all your water even when sap isn’t as plentiful?

I also decorated the calendar with images of birds that frequent my area in the winter.  Here are the Carolina Chickadee and male Northern Cardinal as the 2(0) and 1(0) digits: a male Rufous-sided Towhee (the ones in my yard have red eyes like this one) and winter-plumaged male Goldfinch stake out 9 and 8: I didn’t think I would enjoy painting a House Finch as much as the other birds, but this male perched on 7 became my favorite, tied with the Cedar Waxwing.  6 is a Slate-colored Junco:

For years, I wondered what the Cherokee people were referring to by “Snowbird.”  There are the Snowbird Cherokee, Snowbird Mountains, and the word “snowbird” in my Cherokee dictionary doesn’t split into words for “snow” and “bird”, so I knew it had to be something unique.  I eventually found out that the snowbird is the junco!  This makes sense, as they winter here, feed on the ground even in snow, and their bellies are white.

As they spend their summers in Canada, this certainly gives new meaning to also referring to Canadian warm-weather tourists as Snowbirds!

5 is a White-throated Sparrow, 4 a Tufted Titmouse: 3 is a Carolina Wren, and 2 is a Cedar Waxwing.  It occurs to me that I should have painted a white berry instead, as their consumption of the berries is one of the primary ways P. leucarpum spreads: 1 is a male downy woodpecker, and 0 a bluejay, which have only started visiting my yard this year: Here is the finished product, with number tags suspended from gold-painted toothpicks: 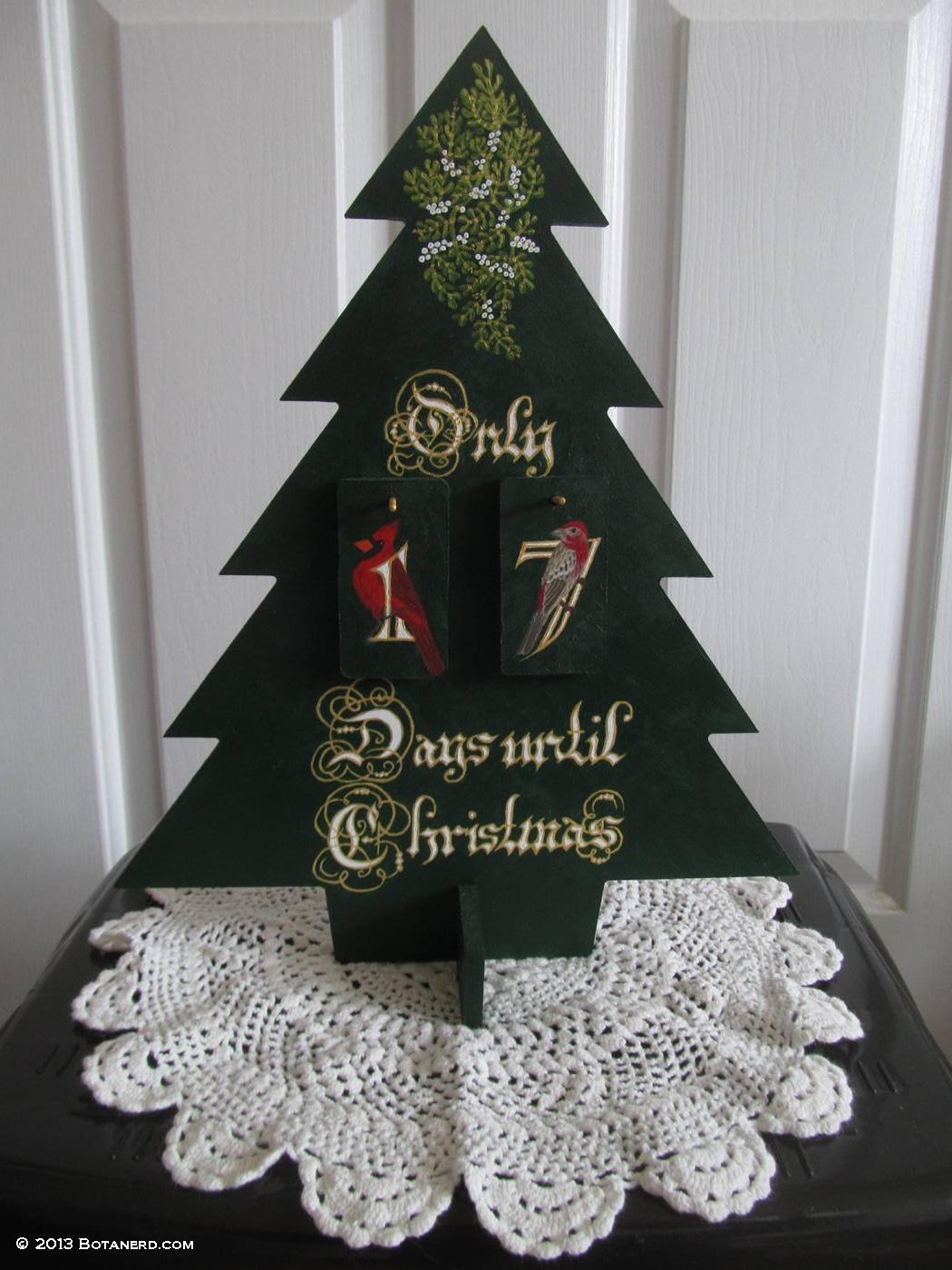 And on the back, I made it possible to keep track of the 12 Days of Christmas, ending January 6! 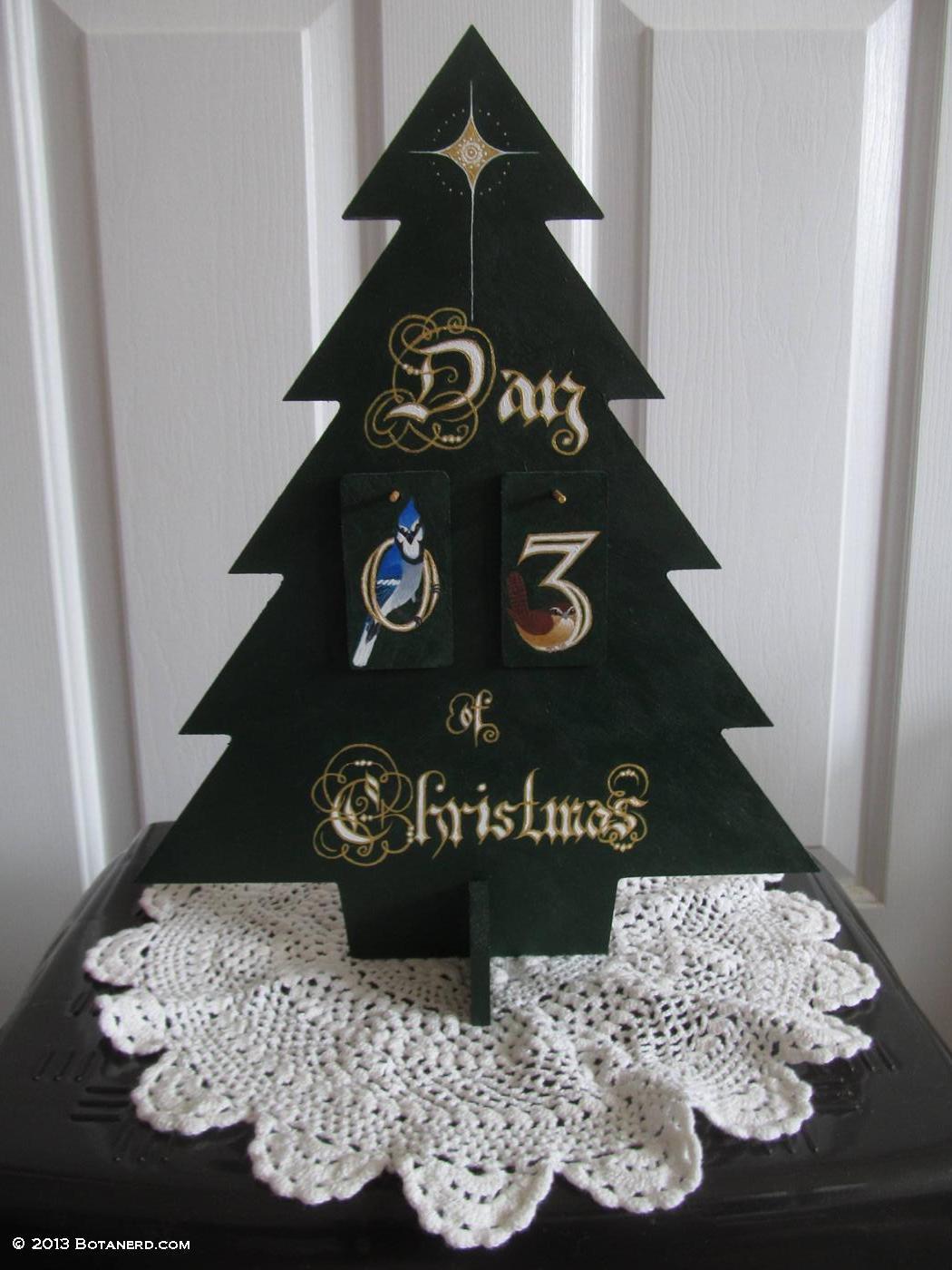 Here are some detail shots:

As stars don’t naturally occur in fir trees, either, I think I’m good! 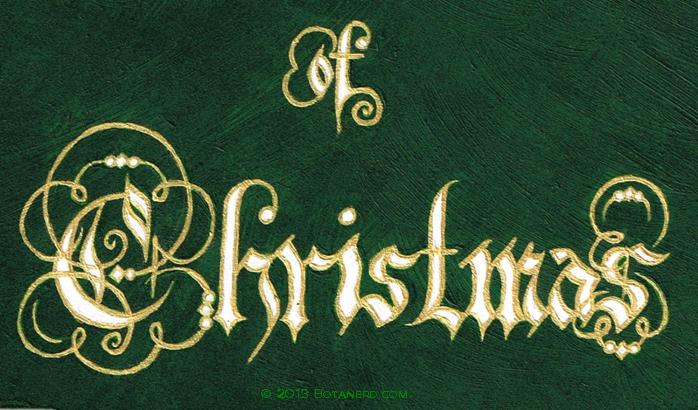 While the numbers were based on the Colonna MT font, I based the lettering on Parchment font with a few subtle changes.

So, what kinds of birds are in your area over the winter?  If you’d like to broaden your awareness, you might be interested in the Great Backyard Bird Count.  Participants record every bird in their yard between February 14 and 17.  I did this one year in high school and had a lot of fun with it, becoming much more conscious of the variety and number of birds surrounding me.